Brooklyn Nine-Nine returns with a season premiere with all the fun and laughs. Here’s a recap!

In the season premiere of Brooklyn Nine-Nine, both Jake and Holt have a difficult time adjusting to the new ways. After being called to investigate an assassination attempt, Jake tries to hunt down the suspect but Officer Holt tries to help out more and more and ruining Jake’s time to shine, even stealing a few lines from Jake too. As Jake gets Holt and his partner to look around on another street, Jake and Charles get the Weiner Squad, Scully and Hitchcock, to help locate hot dog stands, due to the suspect was selling hot dogs. When they learn that one corner street doesn’t sell hot dogs they knew that’s where the suspect was and Holt and his partner found that out literally.

Meanwhile, Rosa helps Amy with the issue that she might be pregnant and while trying to take a pregnancy test; Amy couldn’t pee. That is until Terry, who’s been a bit jumping on judgment, helps Amy after pissing her off which made her pee. But by the time she had to go they all had to go stop the suspect, which was hold both Holt and his partner up as hostage. Long story short…Amy knocks the suspect out and goes to the bathroom. Later she tells Jake about she thought she was pregnant and tells him that she’s not but the idea of having a baby is a go show.

“Manhunter” was a hilarious season opener with all too many good things. From the Jake and Holt dynamic to Amy/Rosa/Terry scenes were just too funny. The Jake and Amy story plot was really good and opens a possible baby down the road, maybe next season. Vanessa Bayer’s performance was amazing. Overall, I give this episode a 9/10. 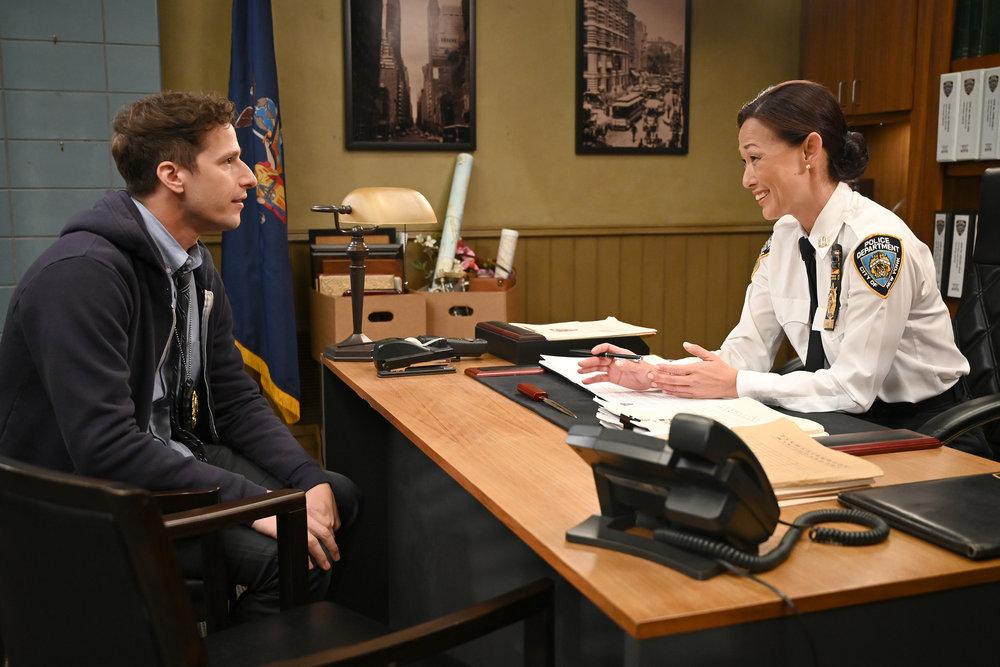 There’s a new Captain at the 99, will the gang be accepting?

When the new captain comes to the 99, Jack and the others have differences of opinions of what kind of person they might be. Turns out that she, Captain Kim, is nice. But both Jake and Holt don’t believe a thing that she says and at a dinner party tries to find dirt that she’s has a connection to Madeline but turns out that she join help fill in Holt’s seat till he gets back. After that, she left the 99 and Terry becomes the Sub-Captain.

“Captain Kim” was such a fun episode especially with Jake and Holt trying to figure out about Kim and Amy trying to stop them like the hall monitor. And even Charles acting up unlike himself was just hilarious as he wears Rosa’s jacket. The episode was witty and fun. While it might be the greatest episode of all time, this is sure an episode that will be great rewatching. Overall, I give this episode an 8.5/10.

What did you think of the season premiere? Leave a comment and tell us your thoughts.